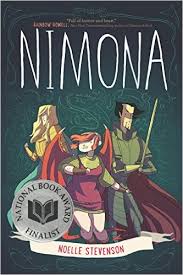 Dragons, magic, shapeshifting, feminism, diverse characters.  Author Noelle Stevenson has turned her brilliant webcomic into a full-length graphic novel, and if you haven’t read either yet, what the heck are you waiting for?

Nimona and Lord Ballister Blackheart have teamed up as sidekick and supervillain.  “Teamed up” is a term used loosely here; did Blackheart even have a choice? Nimona, a kick-ass young shapeshifter, bulldozed her way in and forced him to take her on. Her impressive powers of shape-shifting, with the ability to turn into any living thing, left him little choice. Seriously, what would you do if you were suddenly faced with a talking shark? With breasts, no less? (No kidding, just one of the brilliant images in the book. It makes me giggle just thinking about it.)

Ballister is out to expose Sir Ambrosius Goldenloin and the Institution of Law Enforcement and Heroics for their villainous activities; Nimona wants to help him succeed.

But Blackheart has a secret and a problem. His heart is not actually black, it was just  trampled on, many years ago. And once upon a time, Blackheart would have been a hero. But mistakes and jealousy and misunderstanding took their toll, and he felt forced into the role of villain. Always with an empty space in his heart for the man he thought turned his back on him.

And the corresponding problem is Nimona’s mysterious past and a yen for villainy and danger. She wants to help Blackheart be unbeatable, and she’ll use any means at her disposal. It is a combustible combination.

This is a poignant, gleeful, violent, humorous, subversive, heroic, irreverent, action-packed graphic novel about friendship and love and redemption.

Nimona is a wonderful erratically unpredictable character with a backstory that is revealed piece by piece, with each new tidbit letting the reader in on more of her secrets and motivations. Her loyalty and devotion to Blackheart are heartbreakingly lovely, even though she sometimes expresses herself in ways most would find socially unacceptable.

The dynamic between Blackheart and Nimona is endearing and absolutely hysterical. His deadpan humour and her overeager belief in total annihilation work perfectly to create a relationship that leaves readers in stitches one page, and on the edge of their seats the next, with tears always a possibility.

That relationship between Blackheart and Goldenloin is wonderful. The story of two people who had jealousy and uncertainty break them apart (well, and an arm severing, with no subsequent apology or acknowledgement of guilt, which can put pressure on a relationship), but truth and goodness and acceptance and respect bring them back together.

The violence is quite graphic (no pun intended), but the novel also has great themes of acceptance and friendship and morality and good and evil, while remaining fun to read. This is a fabulous story that follows through to a great ending, with nothing Hollywood about it.  After you read it, you’ll want to rush over to Stevenson’s site and read more of her work.

Nimona was published May 12th, 2015 by Harper Collins. 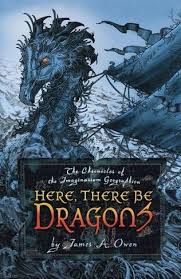 The gorgeous covers of these books are reason enough to read the series. But thankfully, the story inside more than lives up to them. The Chronicles of the Imaginarium Geographica is a complex and gripping seven book series that will immerse you in worlds you only dreamt of until now. Oh, and dragons. LOTS of dragons.

On a rainy night in London in 1917,  John, Jack, and Charles are brought together by the death of Professor Sigurdsson. He was the Caretaker of the Imaginarium Geographica, the atlas of every mythological and legendary land known. A strange little man named Bert, a traveler, tells the three that the Professor’s work is now passed onto them. He tells them of the mythical lands that exist in the Archipelago of Dreams that can only be reached by the Caretakers, aboard a Dragonship.

But now that they have accepted the role of Caretakers, John, Jack, and Charles learn that the Archipelago is in danger, and they must defeat the forces that threaten their worlds, both real and imaginary. And there will be a price.

The characters in this series are incredible. For a reason. Many of them are based in reality, and to come across Houdini and Twain and Poe and Conan Doyle alongside Mordred and Calypso and a talking badger will spin your brain. Pleasantly.

The mythology is layered and woven in such a way that the legends and stories that are so familiar become new and rich and surprising. There are nods to Greek and Celtic lore alongside references to American and British classics. Author James Owens borrows from these stories and creates a new saga wherein it makes perfect sense for King Arthur to meet Captain Nemo, and Circe to advise Tolkein.  Everything connects; the original texts are treated respectfully while adding new layers to allow the characters to fulfill their roles. Just as I think I can predict where the story will take me, Owens throws in a new twist and I am transported somewhere unexpected.

With Oxford Univeristy as the touchpoint, the Caretakers travel through time and space, and worlds overlap and change and move around, through mists and oceans and eons and dreams.

Instead of a map, The Chronicles is filled with illustrations scattered throughout the seven books that are detailed to the point of each being worth well more than a thousand words.

The Chronicles are truly pure fantasy, with adventure and dragons and magic and elves and trolls and knights and kings and goddesses and good and evil and wonderful imagination. And the plot is exceptional. Even though the places and images and storylines are familiar, there are unexpected adventures and connections that keep the reader off balance. The ending to the first book alone serves to emphasize the brilliance of the series.

This stunning series is an homage to the remarkable fantasy writers of our time, and those that came before. Filled with complex images and language, it can be read by any age. It may be intimidating for the younger reader, but as a read-along with mom or dad, they will be exposed to a wonderful world of dragons and magic and literature. I do think it isn’t the type of series you will want to binge-read, you need breaks in between books to really absorb the stories.

Here, There be Dragons, The Search for the Red Dragon, The Indigo King, The Shadow Dragons, The Dragon’s Apprentice, The Dragons of Winter, and The First Dragon are all published by Simon & Schuster Books for Young Readers.