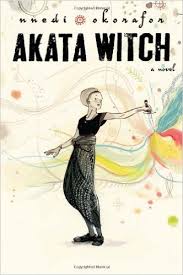 12-year-old Sunny moved to Nigeria from New York City three years ago. Albino and sensitive to the sun, she can’t do what she wants.  Which is to play football in the sun with her brothers, avoid her father’s temper, and have a friend at school.  But instead, she is left out of the games, beaten by her father when he is displeased with her, and constantly bullied at school for being different.

Until the day after she sees the end of the world in the flame of her candle. Her classmate Orlu sides with her during her daily humiliation at school, standing up to the bullies, and then takes her under his wing.  He suspects what she is and introduces her to Chichi and Sasha and Anatov, and suddenly Sunny learns that all her strangeness and differences mean one thing: she is a Leopard Person, and she has power. Great, mystical power.  As part of this ancient community, she is finally accepted, even sought after, for who she is.

This novel is fantastic. An African-based fantasy in which learning and reading are rewarded, where tradition is interwoven with fantasy and magic, and the main character is an athletic, curious girl who goes against all stereotypes and expectations, without any of it seeming forced.

Sunny has had a life of challenges. She looks different, feels different, and must be treated differently that the other children her age. She has to carry an umbrella to shade her skin from the sun, and her pale brown skin stands out from the ebony of her classmates and family. Her classmates call her “akata” which means “bush animal,” slang for foreign-born blacks.

But when Sunny realizes that she is different, that she has magic and knowledge that is restricted to a very few, she handles it pretty much how any normal 12-year-old would.  She has moments of fear and disbelief, she lets it take over in a moment of anger, she learns the responsibility that comes with it, and she embraces the opportunity to learn and grow.  I love her.  She leads a double life as she studies juju and magic and learns to call her spirit face, all the while still going to school and keeping her new-found abilities a secret from the Lambs, or non-magical population.

All the characters aside from Sunny have distinct personalities and roles which move the story along while building the group of friends into a coven of power.  Chichi is blunt and superior but underneath understanding of Sunny’s reluctance and nervousness. Orlu is the peacemaker and the surprisingly powerful yet humble member of the foursome, while Sasha is the brash American, sent home to Nigeria to keep him out of trouble, which gives him great opportunity to find new mischief.

Leopard Knocks, the gathering place of the Leopard People, is a world within a world and is world-building at its absolute best. Visitors to the mystical town must summon their spirit faces, or true selves, in order to see the bridge that leads in.  Once across it, there are shops and cafes to visit, buildings that look like only magic can keep them from toppling over and the Obi Library containing knowledge and power. The people who both live there and visit understand the power of the Leopard People, and celebrate the differences that make everyone unique.

All the while there is an element of danger just below the surface. Not only is the four’s coven tasked to hunt down a serial killer, but even the training they go through can be deadly. But to counter the darkness is light, falling bronze chittim (magical currency) when a new skill is learned, a football game with other Leopard children that strikes a blow for girls’ rights, and an artist wasp that creates sculpture and craves applause and praise.

I love how author Nnedi Okorafor included Fast Facts for Free Agents, a book-within-a-book that Sunny reads to learn more about the Leopard People and her own powers. Written in a patronizing and arrogant tone, the informative book gives Sunny a starting off point for catching up with all she needs to know about herself, while also providing background for the reader without it seeming like an info dump.

This is a coming-of-age story about a young girl discovering power within herself. Sunny learns what she is capable of even as she learns what it means to be part of a community and family. These are common elements enough to any YA or middle-grade fantasy story, but Okorafor takes them and writes twists to make the story surprising and fresh.