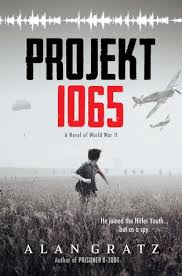 13-year-old Michael O’Shaunessey is the only son of an Irish diplomat and his wife, living in Nazi Germany during WWII.  Michael is a member of the Hitler Youth.

But not only is he a member of the Hitler Youth. He is a member of the most elite arm of the organization, the SRD. He is one of the boys other boys run from. His presence invokes terror and respect. Because all who see him know that he would die for Hitler, that his life means nothing to him. He was born to serve the Nazi Party.

Except that he wasn’t. He and his family despise everything the Nazis represent. Ireland may be officially neutral, but Michael and his parents aren’t.  His mum is a spy, and she trains Michael to do the work with her. His photographic memory and innocent eager demeanor prove valuable in their clandestine fight against Germany. But when an unlikely friendship leads him to the discovery of Projekt 1065, it puts him in the dangerous position of having to prove his loyalty to Hitler.

The characters in this novel are interesting. Michael came to Germany as a young boy, and having Irish parents, is not indoctrinated into the Nazi beliefs. But he still must survive in Germany and must blend in so as not call attention to his mother’s activities. The boy has a strong moral compass and knows he is witnessing evil firsthand. But he is still a boy and still craves friendship and action.

He is faced with moral dilemmas ranging from witnessing the killing of Jews on Kristallnacht to the mistreatment of a teacher by fellow Hitler Youth. But he is so immersed in the romance and adventure of playing spy that it isn’t until a person he deeply cares for is sacrificed does he realize that it truly is not a game. He learns that choices have to be made for the greater good, no matter the personal cost, which can sometimes be unbelievably high.

His parents are present throughout the story, and his father constantly questions the need for his son to be further endangered. But his mother recognizes the value of a child is in the intelligence game is that no one would suspect him, leaving him free to listen and look where others couldn’t.

Fritz is Michael’s friend and ally in the Hitler Youth, although Michael has a hard time believing that someone who likes western detective novels and has a hard time participating in the book burnings can ever be a true believer. But Fritz is, and his fanaticism is spot on. He and the other boys with whom Michael interacts are blindly devoted to Hitler, and willing to die for the ideology of the Third Reich.

The plot is engaging and fast moving. With a setting like Nazi Germany during the war, it can hardly be anything else! The story takes place over just a few weeks, with everything from the discovery of the plans to the rescue of a downed pilot, his escape, and Michael’s urgent trip to Switzerland crammed in.

All this is good. But there are still a couple of weaknesses in the novel that make it a good read when it could be a great one.

The first problem is stylistic. Chapters are short, sometimes only a page in length, and did not always need to be broken up. Which made me think that either the author had trouble moving from one scene to the next, or just liked the look of short passages. Although the war is a great setting and things changed so quickly, it made for choppy reading.

The second criticism is of the content. Nazis were bad. I know that, you know that, I think even those unfamiliar with WWII and all its details know that. But author Gratz felt the need to make sure that Michael said or thought, almost once every very short chapter, that he hated the Nazis and everything they stood for and he couldn’t believe that some people worshipped Hitler. I do not need to be beaten over the head with the information. It felt like Gratz was trying to force me to find Michael likeable. Michael is likeable. But he is also a boy that has lived half his young life surrounded by Nazi propaganda. While his parents can set an example and tell him that Nazis are bad, it would not be out of the realm of possibility that he get a bit caught up in SOME of it, while still recognizing the inherent evil.  And that would not make him bad. It would make him human.

In World War II Nazi Germany all boys were compelled to serve in the Hitler Youth. In fact, many prominent world figures of the past half-century were forced to serve in the various units. This novel makes a really good middle-grade companion to the non-fiction histories written about the time. Well researched, it is packed full of action and adventure and is an interesting way to learn about a fascinating and fanatical organization. 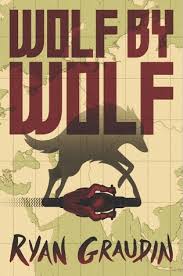 So much for a nice, light read. Wolf by Wolf will grab your heart and leave you gasping for breath. This is one that you will not be able to put down.

In 1956, in the capitol of the alternative reality Third Reich, Yael carries the hopes and the weight of the resistance on her shoulders. As the survivor of a painful medical experiment in the death camps, she escaped with the ability to change her appearance at will, or skinshift.  This supernatural ability is her hope for a successful mission to change the world.

The victorious Third Reich and Imperial Japan control half the world. To commemorate their Great Victory over Britain and Russia after WWII, Hitler and Emperor Hirohito host the Axis Tour: an annual motorcycle race from Germania to Tokyo, 20,000 kms long, with the best of the best of elite teenage racers competing. The victor is honoured with wealth and celebrity, and the chance to meet with Hitler himself.

Yael has one goal: win the race and kill Hitler. Avenge and honour the lives of millions, but specifically the four lives that haunt her, and the one life that taught her to live again. But she can’t race as herself; she does not exist. Yael must become another in order to compete, she must stand out to blend in.

Yael is an amazingly relatable character, given the torment and torture that defined her childhood.  With her ability to skinshift and take on new faces and personas, she must find a way to define herself beyond her physical presence. She learns to channel her pain, not to leave it behind, and to use it to fuel her purpose.

The various supporting characters are as alive as Yael. With a few strokes of her pen, author Ryan Graudin paints vivid characters that fight and race and scheme and die around the reader. The five wolves that mark Yael are as distinct as the rest of the cast; while their actual appearances in the story were necessarily brief, their images haunt throughout.

The world building, difficult to do in a “what if” recent past, was impeccable. Graudin transported me to the dark streets of Germania, dingy beer halls, arid deserts, exotic cafes and humid jungles. The various scenes had me on the edge of my seat, and I can say with complete honesty that the ending was a total surprise. I did not know who to trust, and who to avoid. I did not know if Yael would be successful in her mission; Graudin gave nothing away. The twist at the end left me reeling.

There will be a second book – thank goodness! I need more.

This is an excellent book, but with dark imagery of death camps, medical torture and wartime. It may not be for everyone.

Wolf by Wolf is published by Little, Brown Books for Young Readers.