17-year-old Gabe is passionate about music and wants nothing more than to host a radio show and talk about music and play his tunes and share his obsession with everyone. He hosts an hour-long midnight show on the local radio station once a week and finds obscure themes for his offerings. He soon has a small but loyal following.

His story is, for all intents and purposes, a typical YA coming-of-age novel: finding his way, wondering about girls, figuring out what comes next after high school. Except Gabe was born Elizabeth.

This is a tough one to review. I have been struggling to put my thoughts into words for a few days; while the execution comes up a bit short, the story is captivating.

Gabe is a great character, comfortable in his knowledge that he is male, but conversely, he expects everyone else to have trouble with it. He feels almost as if he has failed, and doesn’t deserve to be happy or protected, or accepted for who he is. He hides his true self from all but a chosen few, and can’t wait to leave his town so he stops worrying about being outed.

While the transsexual storyline is at the heart of the book, it is the relationships that stand out and really make the story. And while sexuality does have an impact on each one, it is interesting to see how in the end, it is not the most important factor.

John and Gabe have a wonderful relationship. Gabe is John’s musical protege, while John serves as confidant, with unconditional support and love for the boy. While I thought at first it was a bit of a grandfatherly relationship, as the story continues, you see a true friendship between the two. Having lived all his life surrounded by artists and music, John has seen it all. His only worry is that he slips up and calls Gabe Liz sometimes. His acceptance is in stark contrast to Gabe’s family and their reactions.

The relationship between Gabe and BFF Paige is as authentic and very intense. The two of them have complete trust and love for each other, even as they try to define what Gabe’s transition will mean for them. Paige loves and supports him, even as she struggles with her feelings of how to deal with the new iteration of the same person she has loved for so long. And Gabe’s feelings for Paige, and how he deals with them, are mature and tug at your heartstrings.

After Gabe is outed to them, the Ugly Children Brigade accepts Gabe and his A Side/B Side because they recognize it in themselves. And that is a great storyline. Sometimes you have to hold your breath and leap and hope for the best.

It is not all rainbows and unicorns, however. There are extreme transphobia and hate and violence, which sadly, rang all the truer after the horrific events in Orlando over the weekend.

I liked that at the end of the book, Gabe is still figuring things out. There is not a cliffhanger as such, but his life is not fully resolved. Art imitating life.

Even though the story is written in the first person, it is a bit harder to connect with him than I expected. Usually, with first-person narration, the reader feels like s/he is getting a glimpse into the narrator, hearing their thoughts, feeling their feelings. With Gabe, it is a bit like listening in on a conversation he is having with someone else.

As well, the relationship with Gabe and his family didn’t completely work. Obviously, I have no experience with this, but it seemed to go from complete denial to complete acceptance very quickly; where I picture a gradual coming-to-terms with a change of such magnitude after the initial refusal to acknowledge it, everyone seemed to abruptly turn a corner, even as they said they needed time.

But, despite the issues I had with the execution, this is a good novel. It is appropriate for the entire YA age range, and anyone who wants to know more about the trans experience. 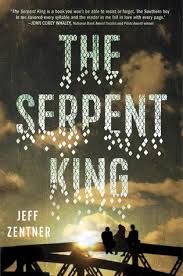 “If you’re going to live, you might as well do painful, brave, and beautiful things.”

Three friends with three very different lives, bound together by love and respect for each other. One with a cursed name and history, one with a destructive present, and one with a glowing future.

Set in a small town outside Nashville named for a big wig in the KKK (“the second ‘r’ in Forrestville is for racist“), the story takes place over the friends’ senior year in high school as they each face a future apart from the others, and try to find their own way.

The Serpent King is told from three POVs, and each voice is distinct in personality and tone. Even at the beginning of the book, even without the name at the head of each chapter, each narrator is unmistakeable.

Dillard Early Jr. lives in a world where he takes on the sins of his father. He lives in fear that his grandfather’s and father’s instability was passed down along with their name; his grandfather’s obsessive grief that led to his suicide and his father’s snakehandling, poison drinking, Pentecostal evangelicalism are two sides of the same coin. Dill fights back the darkness that shadows his everyday life. There is light, but he must choose to follow it. Will he be strong enough, with the burden he already carries, to make that decision?

Travis is an epic nerd. A giant of a boy who dresses all in black, carries a staff, wears a dragon necklace, and can quote pretty much all of the high fantasy series Bloodfall is going to be open for attack in any small town. But Travis, he of the horrible home life and bleak future, he of the gentle nature, knows who he is and takes joy in the moment. Travis has courage. And Travis broke my heart.

With doting, supportive parents, Lydia is privileged, determined, and self-assured. She hides the insecurities she does have with a smart mouth and an incredible work ethic that will see her set her corner of the world on fire. And she has love for and faith in her two best friends, no matter how the rest of the world sees them. She plots her escape from this small-town hell and fights for the same opportunity for her friends.

And Jeff Zentner is a musician who decided to write a book that reads like a love song to growing up.

This book punched me right in the heart, then turned around and filled it with hope. It is nothing short of spectacular.

This book was a surprise.  I picked it up on a whim (actually, it was the cover that got me – SO pretty) and couldn’t put it down!  It is funny and charming and sweet, with just a touch of acid.

16 year old Ivy Emerson is rich. Well, her parents are. And then, suddenly, they aren’t any more.  They sell their huge house, and downsize to a small 3 bedroom apartment, on the wrong side of town. Ivy goes from having her own room AND one for her grand piano, with her best friend living next door, to living in a tiny attic bedroom with paper thin walls and a drug-dealing teen in the house beside her. That’s a bit of a step down in the world.

I didn’t like Ivy at first, which is probably the point. She is snobby and stuck-up and judges everyone by money and looks and where they live. She handled the move fairly well, didn’t throw a tantrum at her parents when she found out they were broke, but WHAT a snob. I can’t move to Lakeside! What if my friends find out? What do you mean no cell phone? I can’t ride THAT BUS to school! What will people think?

All that said, she rings true as a character. Her relationships with her parents and her twin 6 year old siblings are authentic, and it never seems like the author forces anything into the story to work. Her love and fierce protection of her mentally challenged brother and her conflicting wish for a life where her dreams aren’t secondary seems normal.

Reesa and Molly are well written characters, again, very true to teenage life. Kaya and Brady are great 6 year old twin siblings, and Lennie and James were as they should be. One a bit scary with a heart of gold, and one too perfect to be true.

I am not usually a fan of the love triangle, which is so prevalent in YA fiction, but I guess it is a quintessentially teen conundrum. Always fall for the wrong guy, even though he sees you only as friend or likes your best friend, all the while ignoring the one you should be with.  I guess we’ve all been there. Ahem. Anyway.

And this story is all about the love triangle. And how perceptions can change when you actually take the time to know someone, instead of assuming.

I liked the musical theme throughout the story, and the parallels with Ivy’s life. She is a  talented pianist, and her music helps her figure out who she is, and what is important in her life.

Between the Notes is funny and sweet, predictable but enjoyable, and is appropriate for all ages. (The kissing will make anyone giggle.)

It is published by Harper Teen.