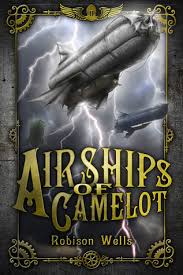 A post-apocalyptic steampunk wild west retelling of the Arthurian legend. That should get your attention, am I right?  There is a LOT going on in this novel. And I’m on the fence about how well it works.

To escape the Spanish flu epidemic after the Great War, U.S. Navy officers took to their airships in search of isolated places to hide their families and make a new life. But instead of banding together and saving their country, only three generations later there is an uneasy alliance between the now divided territories, each controlled by an Admiral. And that Admiral must negotiate with the Texans who control the helium reserves, or the airships don’t fly.

18-year-old Arthur is heir to one of the territories, Camelot. But although it is a peaceful land, his father’s mistress Morgan and bastard son Mordred scheme for power. Arthur’s ship spends weeks at a time raiding the various settlements his crew comes across for plunder. The Camelot residents see the inhabitants as savages, potantially infected with the Spain. Any goods they might have are ripe for the taking. But during a risky raid, Arther is stranded on the ground and he begins to see his life and land a bit differently.

This is one of those books that started out very slowly. It didn’t grab me by the throat and refuse to let me go, but I still read it cover to cover in one sitting.

There is good character development. Familiar names pop up throughout the story, and the instinct is to immediately connect them to the original myth. But author Robson Wells doesn’t make it that easy. Instead, he takes their personalities and builds new characters from the legendary ones. He succeeds fairly well. And Excalibur itself gets a new backstory and a steampunk makeover.

Wells does a marvelous job of world building. Recognizable landmarks in the southwestern US are given a bit of a twist to adapt them to the new world order, and they truly add to the atmosphere of the story.

The plot is slow at first. The history of the conflict, the epidemic, the way of life in the post-war society, the personalities involved, all take quite a bit of time to properly set up. But once Arthur is on the ground, the pace picks up along with the action.

There is a lack of information about the technology and steampunk aspect in the post-war world. Technology should be front and centre in steampunk, but it takes a bit of a back seat in this novel. Not enough is made of it; mechanical lungs, metal arms, juggernauts, etc., do not seem to be completely commonplace, yet there is neither an aversion or intense curiosity about the technology. It just is. And I want my steampunk to be very steampunk-y.

I’m not sure how much I would really label this story a retelling of Arthur. While there is acknowledgement of the legend and vague links to the original characters and storyline, without the title of the series the connection is not too obvious.

SO. I didn’t love this book, but would definitely finish the series. It is a fun nod in the direction of the Arthurian legend, with a tenuous link to the original story. But it has all the elements needed for a good tale, and with sequels, there is the potential to ramp it up a notch or two. It is good, not great, but can be read by anyone who likes an adventure.

The Rise of Arthur was published October 15th, 2015 by Franklin Shepherd.

8 thoughts on “Airships of Camelot: The Rise of Arthur (#1)”