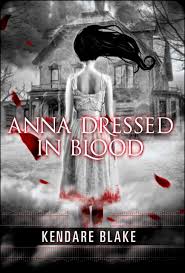 I love murder mysteries, but have never been the biggest fan of the horror genre. It’s a bit much for my already over-active imagination.  Anna Dressed in Blood might change that. After reading book one of the series, I am looking forward to the second.

Cas Lowood has inherited an unusual calling in life. He kills the dead. Well, he releases them. And only those that are dangerous, that threaten the living. He and his witch mother, her weird witch’s companion cat, and his athame (the mysterious knife he inherited from his father along with the job), follow hints and legends and hear-say, moving from city to city, ending the murderous rampages of the already dead.

His latest adventure takes him to Thunder Bay, Ontario (woooo!), where he is looking for a ghost that the locals refer to as Anna Dressed in Blood. This bloodthirsty spectre has haunted her former home for more than 50 years, since she herself was gruesomely dispatched the night of a school dance. Anyone who stumbles into the now-derelict shack is swiftly decapitated and torn limb from limb. Lovely. You are warned.

What Cas discovers when he confronts the ghost is one with more rage than he has ever dealt with in the past. She is uncontrollable, powerful and invincible, tossing him around like a tennis ball. But she doesn’t kill him. He, in turn, cannot release her to find the peace she craves. Her long ago murder holds the key.

Characters, setting, pacing, plot.  Loved it all. The characters are all relatable, well-written and believable (yes,even the ghost killing teen and the ghost herself. Anna is awesome.). The language is realistic – the occasional f-bomb from a 17 year old is expected, but so often avoided in YA lit.

Loved that the book is set in small town Ontario. The descriptions built a familiar landscape, are recognizable and authentic.  And when Cas said “…and Carmel and Thomas looked pale, even for Canadian kids,” I cracked up.

The book is fast paced and moves from one scene to another seamlessly.

I liked how author Blake did not end the book predictably. There was the easy, romantic pairing that I think would have taken away from the story as a whole, but she went in another direction. Good.

There are a few issues with the book, but none of them are game changers for me. Blake does not explain the history of the athame or of Cas’s family; what makes them so special that they are the only ones that can kill ghosts? What is the relationship between the athame and his father’s killer? It doesn’t make total sense to me.

Maybe these questions are answered in book two, which means I am going to have to go for it. Because I so need to know. And I thought I didn’t like horror.

By the way.  AWESOME cover.

There is a LOT of violence and gore in this novel, well-written, but there, nonetheless.  Be prepared. Otherwise, appropriate for any teen (and adult!) who can handle it.

Anna Dressed in Blood is published by Tom Doherty.